You are using an outdated browser. Please upgrade your browser to improve your experience.
by Joe White
October 14, 2012
If, like me, your Passbook application is rather on the empty side, consider adding a couple of fun, novelty passes to the application. The folks at Flon Solutions have created a handful of Passbook passes for historic, notable events, which you can add (for free) to the application. Passes include the famous Beatles rooftop concert, the Wimbledon 2008 final, and the 1996 Soccer World Championship. As iDownloadBlog notes, here's a complete list of the novelty passes: Recently, WallaBee became the first iOS game to add Passbook support. A bunch of other applications also support the application, too. Though the new service isn't without its share of problems. Enjoy the above passes, and if you have an opinion on Passbook, share it below. Source: Flon Solutions Via: iDownloadBlog 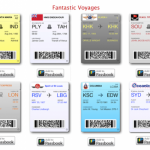 Empty Passbook App? Then Add These Fun, Historic Novelty Passes
Nothing found :(
Try something else