You are using an outdated browser. Please upgrade your browser to improve your experience.
by Brent Dirks
October 3, 2012
Screen protectors always seem to be a fun point of disagreement between iPhone owners. While some users would never be caught dead without one, others complain about the unwanted side effects and cost. I will happily admit that I was firmly in the anti-screen protector camp for some time, but Spigen SGP’s products have quickly helped to change my mind. Earlier this summer, I reviewed the Ultra Optics screen protector for the new iPad, and was very pleased with the solution. With the new iPhone 5, the company has introduced two different lines of screen protectors. And I’ll start with the best of the lot - the GLAS.t. As the name suggests, the protector isn’t a piece of clear plastic, but a 0.4mm thin sheet of glass. So instead of a flexible sheet of plastic to apply to the iPhone 5’s screen, it is completely hard. That makes installation quite interesting. Instead of being able to possibly re-apply the protector if it doesn’t line up exactly on the first try, you’ve only got one shot with the GLAS.t. Thankfully, Spigen SGP includes a microfiber cloth and alcohol wipe to help make sure the screen has no dirt or lint before installation. But if you apply it correctly, you’ll be in for a treat. I had absolutely no air bubbles to force out once the GLAS.t was applied, which was very nice. And the best part of the protector is simple – it’s just like using the iPhone without a screen protector. Instead of having to get used to a plastic feeling, your fingers flow across the glass protector. While some other protectors have also been well known for producing unwanted “rainbow” effects, the glass is completely transparent. Most people I showed the protector to didn’t believe I had anything covering my screen. It’s just that good. There are a few things to consider, though. The thickness does cause the home button to feel somewhat recessed. The company includes six raised home button stickers to apply if the sensation bothers you. And because the protector is glass, there is the possibility that it could be prone to chipping and cracking over time. But if that ever happens, GLAS.t will break into small pieces that are not sharp. The $27.99 price is also a little hard to swallow for just one protector. But after using the GLAS.t on my iPhone 5 since launch day, I would highly recommend it to protect your handset. If you’re hesitant to pay that much, the company also has a line of Steinheil Series protectors. I got the chance to try out both the Ultra Oleophobic and Ultra Crystal protectors. Installation was fairly easy after I wiped my screen down with the included cloth. The Ultra Oleophobic protector does a great job fending off fingerprint and oily marks. And when some did appear, they were very easy to wipe off. It is easily my choice of the two. While both protectors are made of plastic, the hard coating on the top layer is almost as nice as the GLAS.t. Either option is $13.99 and comes with two films in one package, which is a great bargain for households that have more than one iPhone 5. 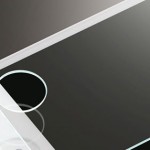 Product Review: If You Want To Protect Your iPhone 5’s Screen, Use Spigen SGP’s GLAS.t

Product Review: If You Want To Protect Your iPhone 5’s Screen, Use Spigen SGP’s GLAS.t
Nothing found :(
Try something else