You are using an outdated browser. Please upgrade your browser to improve your experience.
by Bryan M. Wolfe
October 30, 2012
Apple has announced that iTunes 11 has been delayed until November. The announcement, which was first mentioned by CNET, isn't really a surprise given that we have heard very little about the software update since Apple demoed it in September. According to an Apple spokesperson:

The new iTunes is taking longer than expected and we wanted to take a little extra time to get it right. We look forward to releasing this new version of iTunes with its dramatically simpler and cleaner interface, and seamless integration with iCloud before the end of November.

Introduced at the iPhone 5 event, iTunes 11 was supposed to arrive sometime in October. However, as I suggested last week, it was unlikely that Apple would meet its self-imposed deadline. Now, we know officially that they will not. As of now, the iTunes 11 preview page still says, “Coming in October.” When the update does arrive, it will represent a significant change for the popular application. It will include two new views, library and expanded, and a new miniplayer. In addition, for the first time, iTunes will be without its traditional toolbar on the left side of the screen. It will also have Facebook integration now that Ping is no more. Are you surprised that iTunes 11 has been delayed? Source: CNET 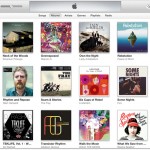