You are using an outdated browser. Please upgrade your browser to improve your experience.
by Bryan M. Wolfe
October 11, 2012
On the day that Apple was expected to send out invitations to an Oct. 17 "iPad Mini" event, but did not, come the results of an interesting new survey of 1,330 people. In it, just 18 percent of respondents said that they were “gearing up to buy” Cupertino’s long-rumored tablet, according to PCMag.com. The TechBargains.com survey, conducted in August, but only released this week, said that 45 percent of respondents expected to purchase the iPhone 5. This compared favorably to the results of a similar survey taken earlier in the year that showed that 48 percent were planning to buy the new iPad. The third-generation iPad launched in March. By contrast, 50 percent of respondents said that they were not interested in the iPad Mini, while 32 percent were undecided. According to Yung Trang, president of editor-in-chief of TechBargains.com:

Given Apple's recent success it would be easy to assume that all new Apple products will be wildly popular. Our survey results indicate that theory is no longer the case.

Here is why the results of the TechBargains.com survey should be viewed with caution: For one, the survey was taken two months ago when most of the attention focused on Apple’s upcoming iPhone release. In fact, August was unusually quiet in terms of iPad Mini rumors. For another, were Apple to release a sub-tablet, its target audience would almost certainly be much smaller than the one for the iPhone and iPad. Personally, I remained convinced that Apple will announce the iPad Mini later this month. Will this announcement happen next week? Only Apple knows for sure. We'll keep you updated. Source: PCMag.com Photo: iPad Mini mockup, 9to5Mac 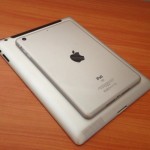 Survey Suggests Most Don't Want An 'iPad Mini'
Nothing found :(
Try something else