You are using an outdated browser. Please upgrade your browser to improve your experience.
by Bryan M. Wolfe
October 10, 2012
Ask most in the media what is wrong with iOS 6 and they will almost certainly say Apple’s new Maps app. Surprisingly, however, actual iOS customers don't see Maps as that significant of an issue, at least according to a new survey from Mike Blumenthal. The survey, which was created using the Google Consumer Surveys tool, solicited opinions from Oct. 5-7. It found that 50.7 percent of those surveyed felt that Maps “hasn’t affected me at all.” Another 23.3 percent said, “it is good enough for me.” In total, just 8.8 percent said that the introduction of Maps would affect their future buying decisions in a negative way. Of those, 3.2 percent said that they would never buy an iPhone again because of it. 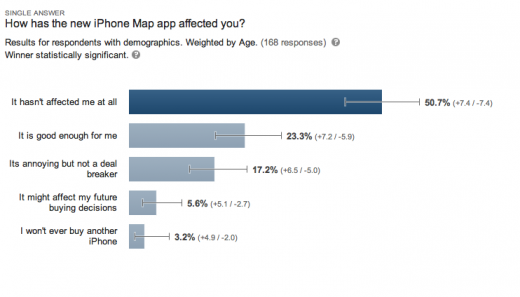 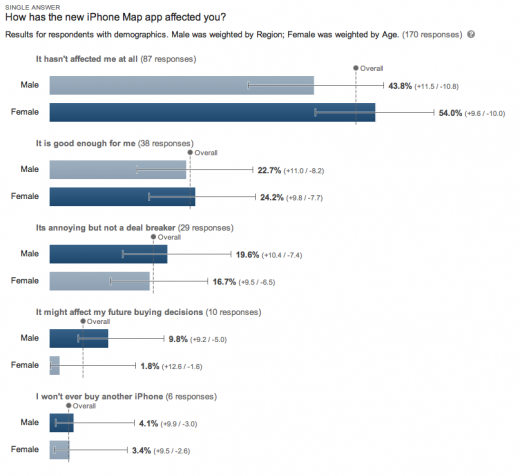 The survey will likely be criticized for its small sampling size of just 168 respondents. Nonetheless, it does offer a snapshot of what some consumers are thinking. Launched last month, iOS 6 Maps has been criticized for lacking many of the features of the previous release which included Google Maps as its backbone. Criticism grew so loud that Apple CEO Tim Cook was forced to issue an apology. Since then, many have noticed that Apple's commitment to making Maps better has already begun. Source: Mike Blumenthal 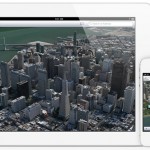 New Survey Suggests iOS 6 Maps Issue Is ... Not An Issue?

New Survey Suggests iOS 6 Maps Issue Is ... Not An Issue?
Nothing found :(
Try something else