You are using an outdated browser. Please upgrade your browser to improve your experience.
by Joe White
October 6, 2012
Just yesterday, we told you how the iOS 6 Maps app makes for quick, fluid offline viewing. Now, we potentially have some more good news about the (unimpressive) application. According to a post over at MacRumors, some folks are starting to see small improvements being made to the app. For example, in the above image, the Statue of Liberty has rendered correctly in 3-D for one iOS 6 user, whereas before the monument was as flat as a pancake. The website reports:

While improvements have been ongoing, MacRumors forum members yesterday began noticing what appears to be a larger set of additions to the 3D content in the Maps app, including both the satellite/aerial imagery and the standard maps. One region that was among the first to be noticed was the New York City area, with a number of improvements including new 3D imagery of the Statue of Liberty being seen.

It seems some of the U.K. 3-D maps are looking better, too. Here's one I took recently of my second home, The University of Manchester. Previously, the historic building was something of a mess when displayed in the iOS 6 Maps app. But now, the results are slightly more impressive. Have you noticed a change in the iOS 6 Maps app recently? Let us know in the comments. 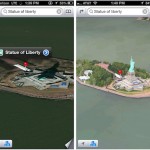 Is The iOS 6 Maps App Starting To Improve?

Is The iOS 6 Maps App Starting To Improve?
Nothing found :(
Try something else