You are using an outdated browser. Please upgrade your browser to improve your experience.
by Joe White
November 18, 2012
Apple has recently been awarded a patent for its digital page-turn animations, which can be found in the iBooks app on the iPhone, iPad and iPod touch, The New York Times reports. According to the patent filing:

The browsing device includes a controller that provides tactile feedback so as to lessen the user-interface differences between conventional books and e-books. Sensors and control mechanisms in the controller generate a series of electrical signals that are interpreted by the computer that displays the e-book to control various browsing operations, such as flipping pages, controlling a rate of page flipping, jumping to pre-set locations in the e-book, etc.

The patent (D670,713) is called "Display screen or portion thereof with animated graphical user interface," and is particular to page-turn animations found in the iBooks app. Apple argues that its digital page-turns are different from the kind found in other e-book reading mobile apps, since iBooks most accurately mimics how a physical page is turned. Apparently, the patent was filed back in December 2011. How do you feel about this recent patent acquisition? Let us know. Source: The New York Times 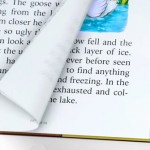 Apple Awarded Patent For iBooks' Digital Page-Turns
Nothing found :(
Try something else