You are using an outdated browser. Please upgrade your browser to improve your experience.
by Brent Dirks
November 8, 2012
While many people were displeased when Apple announced it wouldn’t be producing an official dock for the iPhone 5, the company apparently isn't done with the dock altogether. According to Patently Apple, a recent patent filing from Apple details a new form of iOS device packaging that literally transforms into a dock. As pictured, the concept looks very similar to Apple’s current iOS device packaging. But the magic happens after the lid is removed from the packaging as the base can be converted into a dock that could accommodate something like an iPhone or iPod touch. And the packaging could also be sized to hold a number of items – like other personal electronic devices, and even an iPad. While the idea sounds great, I think this is one of those things I would really need to see in person to believe. Even though there is no Apple dock for the iPhone 5, other third-party manufacturers have been quick to swoop in and save the day with their own versions. The Lightning Dock is a very simple and sturdy solution that comes in a nice metal or hardwood exterior. If you’re a little more adventurous, the iPhone 5 Flash Lightning Dock might be for you. The obviously unauthorized accessory can be ordered with a flashing Lightning cable. But my favorite is still the DIY version from the Daily Brick in the U.K. that is composed of 42 Lego bricks. I can’t wait for the black version to land on my doorstep. Source: Patently Apple 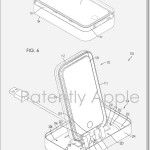 Apple Invents Another Use For iOS Device Packaging

Apple Invents Another Use For iOS Device Packaging
Nothing found :(
Try something else