You are using an outdated browser. Please upgrade your browser to improve your experience.
by Brent Dirks
November 20, 2012
It looks like Siri will soon be brushing up on some more foreign languages. A job description on Apple’s website is looking for Cloud Services Engineering interns native or fluent in “Arabic, Chinese, Danish, Dutch, Finnish, French, Korean, Norwegian, Swedish and fluent in English.” Here’s the roster of current languages that the personal assistant can currently understand and speak: So Siri may soon be fluent in Arabic, Norwegian, Dutch, Swedish, Finnish, and Danish. With reports surfacing that the next version of OS X, 10.9, will also be featuring Siri integration, it’s not a huge surprise that Apple is looking to increase the assistant's reach. But I hope while Siri is brushing up on her language skills, she’s getting smarter as well. After Google released its updated iOS search app in late October, I’ve been using the app more and more. At least for me, it has easily surpassed Siri’s usefulness and understanding. Hopefully some competition (and a new leader) will help bring Siri to where it needs to be. 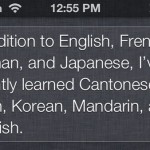 Job Posting Suggests Siri May Soon Be Speaking More Languages
Nothing found :(
Try something else