You are using an outdated browser. Please upgrade your browser to improve your experience.
by Brent Dirks
November 16, 2012
While there was a flood of iPhone 5 cases available for sale soon after the handset hit the shelves in late September, the story has been a little different for the iPad mini. It has been a little harder to find quality cases for the smaller tablet, even two weeks after the launch. But that situation seems to be changing quickly for the better. OtterBox, which has done a great job defining the rugged case category for iOS devices, has already introduced its Defender Series for the mini. Just as Apple refined the iPad formula for the smaller form factor, the Defender case should look very familiar if you’ve ever used an OtterBox product. The case is highlighted by three layers of protection – a hard polycarbonate inner layer, a durable silicone outer layer, and a built-in screen protector.

The first big plus of the Defender is its weight. I’ve previously tried to use the same series to protect my third-generation iPad, but was quickly turned off by the extra bulk the case added. With the case on, the larger iPad just didn’t feel natural to hold. But I’m pleased to say that isn’t a problem with the smaller tablet. I think there are two reasons for that. First, the iPad mini’s diminutive weight makes it a joy to hold anyway without a case. And I think OtterBox did a nice job making the Defender’s materials as lightweight as possible. Even with the case on, I was still able to easily hold the iPad mini for extended periods of time All ports and buttons are protected by silicone flaps or covers, with one big exception. OtterBox chose to leave the iPad mini’s speakers unprotected. And I think that is a great call as the stereo speakers still sound great even with the case on. And if you’ve ever read any of my previous reviews, I’ve always made clear my dislike of any case that offers built-in screen protection. But this OtterBox case is a different animal. The built-in screen protector does a nice job of simply staying out of the way. In my heavy usage over the past few days, in a number of situations, I felt like the protector didn’t cut down on the clarity or color of the iPad mini’s screen at all. As a caveat, I did see a few rainbow-colored spots when I pushed down on the screen, but the phenomenon was not very common. Also included is a combination shield and stand. While transporting the iPad mini, the stand clips to the front of the tablet to provide even more protection. Once unclipped from the case, a stand on the back can be setup to use the tablet in either a typing or media viewing angle in either portrait or landscape orientation. I like that OtterBox didn’t make the stand part of the case. Instead, if you don’t want to use the shield, you can simply leave it at home. The screen film and case still provide a nice amount of protection.

My one major complaint with the case is really confined to the side bezel frame in portrait orientation. Apple chose to dramatically shrink the side bezels of the iPad mini in order to make the smaller tablet easier to hold in one hand. But while the side bezel frame on the Defender is small, it still makes the tablet significantly harder to hold. I have fairly small hands and fingers, but it definitely took some time to find the exact right spot to place my thumb on the bezel. It’s not a total dealbreaker, but it is something to consider if you’re planning on holding the iPad mini with one hand for long periods of time. On the other hand (so to speak), I thought the top and bottom bezels felt great and made the iPad mini even easier to hold while playing games or Web surfing in landscape orientation.

If you’re looking to add an extra-rugged layer of protection to an iPad mini, you can’t go wrong with the Defender case. One of the main users of my iPad mini is my 5-year-old daughter, and with the case installed, I felt confident enough to hand the expensive tablet over and not worry about it breaking. Available in black, light pink, and gray the Defender retails for $69.95 and can be purchased directly through OtterBox’s site. If you’re set on the black color, you can snag it for $10 less on Amazon. [gallery link="file"] 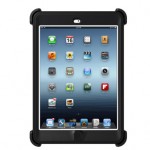 Product Review: OtterBox Defends Its Turf With New Case For The iPad mini

Product Review: OtterBox Defends Its Turf With New Case For The iPad mini
Nothing found :(
Try something else