You are using an outdated browser. Please upgrade your browser to improve your experience.
by Christine Chan
November 8, 2012

My Little Pony - Friendship is Magic (Free) by Gameloft and Hasbro Games brings the wonderful world of Ponyville right to your iPhone and iPad. That’s right, fellow bronies and pegasisters, now you can officially have My Little Pony on your iDevice.

I’ve only been recently introduced to My Little Pony, but I have to admit that it’s one of my favorite cartoons out there. I’m also incredibly excited for the premiere of the third season this Saturday, so it’s only fitting that they released this game beforehand. I’m not exactly sure why I’m so drawn into the cartoon, but I think it is because of the characters, lessons learned, and hey, they’re just downright cute. If you haven’t given it a chance, try it — you may be surprised. But moving on … 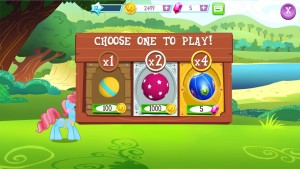 Despite being a free game, I am finding MLP:FIM to be a high-quality title for fans, especially considering the fact that it’s from Gameloft. The graphics are exactly the same as what you see in the show, so it’s definitely not a rip-off of any kind. They also feature the voices of the actual characters, so if you are a fan, you will definitely feel right at home.

Even though this may look like another Farmville-type game, there's actually a story behind it, and quite a lot to do.

If you’ve seen the first two episodes of season one of the cartoon, you will remember how Nightmare Moon is released from her prison in the moon and is set to unleash endless night across all of Ponyville. The game follows this premise, with Nighmare Moon free and trying to conquer. However, it’s up to Twilight Sparkle with her friends and the Elements of Harmony to save Ponyville from a dark fate and restore peace.

The game will start out with Spike the Dragon and Twilight Sparkle showing you the ropes. In short, you will build shops and homes for ponies, wait for them to complete, watch your version of Ponyville grow into a happy, bustling little village, and keep your ponies happy by playing mini-games with them.

There are three mini-games that you can play: a ball throwing game, apple collecting, or flying through the skies with faux wings. In the ball game, you will toss a ball back and forth with one of your pony inhabitants. Just swipe on the ball at the correct moment to keep the ball going. You lose some points if it touches the ground. In the apple mini-game, you tap on either side of the screen to move the pony in order to collect apples. Watch out for the rotten ones though.

Both of these games are timed and will give you the option to select your multiplier (1x, 2x, or 4x). The base level will cost you 100 bits, 2x will be 1000 bits, and 4x will cost you five crystals. Spending money to increase your points will increase the rank of the stars, so try and get a higher multiplier when you can.

These games will earn you points and fill up your pony’s star rank — once a star is filled up, you get access to the last mini-game in order to keep the star. The last mini-game lets your pony fly across the sky with faux wings, where you will collect bits (the game currency) and white clouds to do a fast dash, all while avoiding the storm clouds and incoming pegasuses.

To earn money and crystal shards, you will also need to hire ponies to work in shops. Each shop can have up to two ponies working in it, and your shop output can have two options, depending on how many ponies you have working in it. When a shop is done, you’ll be notified and you can collect bits and crystals from it. Of course, if you are impatient, you can always choose to buy bits and gems from the shop through in-app purchases.

There are quests to go by, as indicated with the book in the top left corner. You can keep track of your quest progress by checking back here. You can also open up the game menu to access the Shop, where you can buy ponies, shops, and decor for your own Ponyville. You can even edit the placement of all buildings and decor from the game menu, view your Elements of Harmony shards, access social aspects, view your current roster of ponies, see trophies, access Gameloft Live, and change settings. 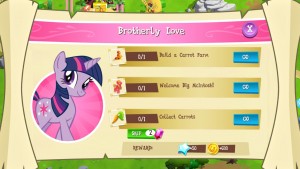 To really grow your Ponyville, you will have to get rid of the dark shadows that are caused by Nightmare Moon. To do this, just tap on a dark section and pay the bits to expand. As you complete quests and earn experience from collecting, you will level up and unlock even more ponies, shops, and decor.

I’m not usually a big fan of these types of games, but I have to admit that MLP:FIM is a very well done game. You will find the entire roster of ponies from the cartoon (including favorites like Derpy, Vinyl Scratch, and Doctor Whooves), along with the perfect visuals and music. The addition of mini-games is nice, though they do get a bit repetitive over time. However, the best part of the entire game is hearing the original voices for all the characters, which definitely caught me off-guard, but in a good way.

This is definitely a great time-waster for kids and adults, but even more so if you are a fan of MLP. I’ve become quite addicted to it, and it’s a great way to ring in the new season of MLP this weekend.

If you want to discover the magical world of Ponyville, then make sure to grab this for your iPhone and iPad for free in the App Store. 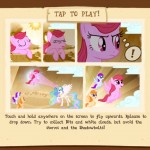 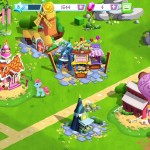 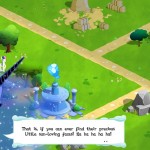 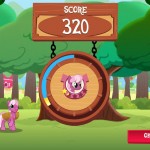 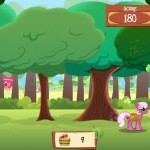 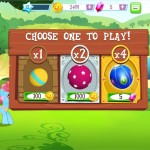 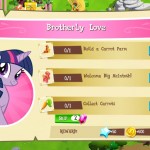 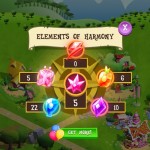 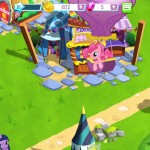 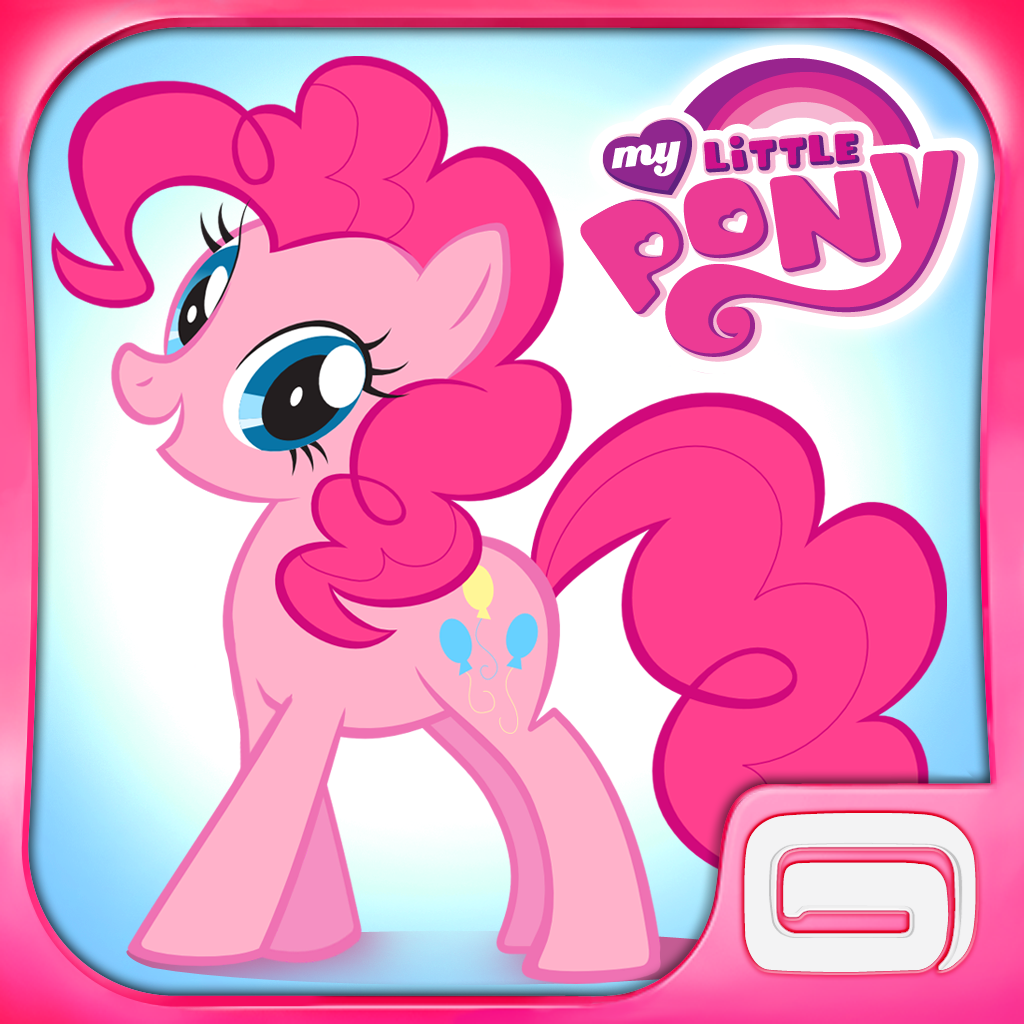 Bronies Rejoice! Create Your Own Ponyville In My Little Pony - Friendship Is Magic

Bronies Rejoice! Create Your Own Ponyville In My Little Pony - Friendship Is Magic
Nothing found :(
Try something else