You are using an outdated browser. Please upgrade your browser to improve your experience.
by Joe White
November 12, 2012
Beware, because a fake IntelliScreen X application has recently appeared in the App Store. The $0.99 universal app promises to offer a "must have" IntelliScreen experience on a non-jailbroken iPhone, iPod touch or iPad. However, the application is nothing more than a scam - don't download it, because you'll be disappointed if you do. Last year, IntelliScreen X launched in the Cydia Store. The jailbreak tweak, which provides iPhone owners with yet another reason to jailbreak their beloved smartphone, transforms Notification Center into an impressive, fully-featured display. Of course, in order to take advantage of IntelliScreen X, you'll need to have jailbroken your iPhone, first. Somehow, the App Store approval team still doesn't seem able to recognize fake applications. Just last week, a faux SBSettings app (supported by countless five-star reviews) appeared in the App Store, and a large number of iPhone owners wasted a dollar on the scam. Don't fall for this new fake application. Remember, IntelliScreen X is only available from the Cydia Store - not the App Store. And if you've encountered an App Store scam, share your findings in the comments. Source: App Store Via: ModMyi Thanks Garrett for the tip! 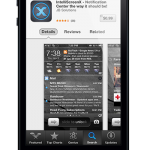