You are using an outdated browser. Please upgrade your browser to improve your experience.
by Brent Dirks
November 12, 2012
There finally seems to be some good news for consumers looking to buy an iPhone 5 from Apple’s online store. Shipping times at the site have dropped from 3-4 weeks to 2-3 weeks for the handset. The change was first spotted by 9to5Mac. The improved shipping times cover all colors and models of the handset from all three carriers – Verizon, AT&T, and Sprint. Earlier this month, manufacturer Foxconn admitted that it was falling short of meeting the increased demand for the iPhone 5. Part of the reason for the issues were apparently increased production standards from Apple to help move past the so-called “scuffgate” that saw new handsets come right out of the box with scratches and dings on the aluminum backplate. If you don’t have the patience to order online, you might want to look at your nearest Apple Store. Consumers, after 10 p.m. in their local time zones, can purchase an iPhone 5 on the site to pickup the next day locally. Late last week, we reported that a supply check of the retail stores was showing increased numbers of the handset in stock. The other popular new iOS product, the iPad mini, is showing shipping times of two weeks on Apple’s site for both the Wi-Fi and LTE versions of the smaller tablet. Via: 9to5Mac 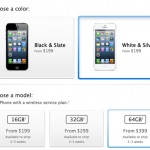 Shipping Times For iPhone 5 Improve At Apple's Online Store
Nothing found :(
Try something else