You are using an outdated browser. Please upgrade your browser to improve your experience.
by Brent Dirks
November 2, 2012
Now that the iPad mini is finally being delivered to eager consumers all over the world, we can see how the smaller tablet compares with the rest of the market. And our friends at Jailbreak Nation put together this video comparison of the iPad mini and the $199 Nexus 7 from Google. Here’s the complete video with tests of gaming, overall speed, and build quality. Click here if you can’t see the video. As you can see, the iPad mini definitely was pretty impressive compared to the 7-inch tablet from Google. While the iPad mini’s screen resolution wasn’t as crisp as the Nexus 7, Apple’s tablet seemed to easily win with the higher build quality and larger screen that shows more content. While the Nexus 7 was easier to hold in one hand, the feat was possible with the iPad mini. I just got my iPad mini a few minutes ago, and have been pleased with the screen quality so far. Yes, it’s not Retina resolution, but it still looks very nice. Along with the iPad mini, the fourth-generation iPad was launched today. Early reports suggest that the lines aren’t enormously long at Apple Store locations around the globe. If you’re interested, you can read our comprehensive reports about the smaller tablet. Source: Jalibreak Nation 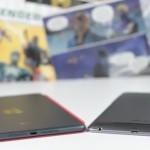 The iPad mini Takes On Google’s Nexus 7 In Video Comparison
Nothing found :(
Try something else