You are using an outdated browser. Please upgrade your browser to improve your experience.
by Bryan M. Wolfe
November 14, 2012
A new Gartner survey suggests that Samsung continues to dominate the smartphone industry. Still, the survey does have some good news for Apple too. In the third quarter of 2012, the two companies controlled 46.5 of the overall smartphone market on sales of 169.2 million units. In total, smartphones accounted for 39.6 percent of all mobile phone sales. This was an increase of 46.9 percent from the third quarter of 2011. In total, 428 million phones were sold between July and September worldwide. In this larger segment, Samsung and Nokia continue to dominate with Apple at No. 3, followed by ZTE, and LG. Apple’s sales to end-users totaled 23.6 million units during the quarter, which was an increase of 36.2 percent year-on-year. This number is expected grow in the current holiday quarter. Says Anshul Gupta, principal research analyst at Gartner:

We saw inventory built up into the channel as Apple prepared for the coming holiday season, global expansions and the launch into China in the fourth quarter of 2012.

By contrast, Samsung continues to pull away from Apple, and everyone else, in terms of overall phone sales. During the quarter, the company sold nearly 98 million units, which was an increase of 18.6 percent year-on-year. Of these, 55 million were smartphones. The news is even better for Android-based phones, as Google’s OS now controls 72.4 of the overall market. At this same point in 2011, Android held a 52.5 percent market share. The share for Apple's iOS has dropped. From 2011 to 2012, the operating system's market share went from 15 percent to 13.9 percent of the overall market. Gartner, however, expects Apple’s fortunes to improve:

With the launch of iPhone 5, Gartner analysts expect iOS share will grow strongly in the fourth quarter of 2012 because users held on to their replacements in many markets ahead of the iPhone 5 wider roll out. Windows Phone’s share weakened year-on-year as the Windows Phone 8 launch dampened demand of Windows Phone 7 devices.

For the quarter, mobile phone sales overall dropped 3 percent year-on-year. In August, Samsung's Galaxy S III overtook Apple's iPhone 4S to become the top-selling smartphone in the United States. However, that is likely to end with release of the iPhone 5. As these numbers suggest, although Samsung and Apple continue to dominate all others, it is Samsung that is the real king of mobile in terms of sales. Source: Gartner Photo: iOSVlog 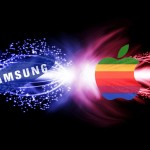 There Really Isn't A Contest Between Samsung And Apple Over Smartphone Sales
Nothing found :(
Try something else