You are using an outdated browser. Please upgrade your browser to improve your experience.
by Bryan M. Wolfe
November 19, 2012
It is becoming another frustrating day for iMessage and FaceTime users. For the second time in as many days, iCloud is down for some users, according to AppleInsider. According to Apple's iCloud status page, "normal service" has been restored for iMessage, FaceTime, and iTunes Match. However, this doesn't appear to be the case.

Despite this issue affecting multiple users, Apple's iCloud website still advertised that all services are functional. It only acknowledged that "some" users were affected by an iMessage and FaceTime outage as of Sunday evening. 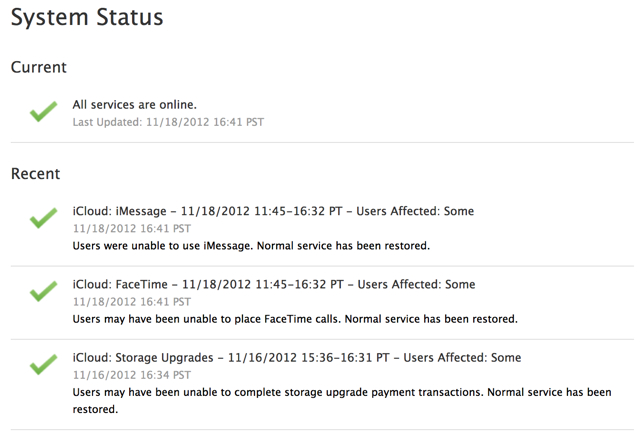 The recent issues with iCloud could have something to do with the upcoming release of iTunes 11, which is expected to be much different than previous versions of Apple's digital hub. Originally scheduled for release in October, iTunes 11 is now expected to arrive later this month. Given that we are currently in a shortened holiday week, it could be that Apple is testing the new iTunes version prior to general release. First introduced in 2011, iTunes Match is a paid service that users pay $24.99 per year to use. It allows customers to store music in the iCloud and have remote access even if the songs weren't originally purchased through iTunes. FaceTime and iMessage are free services. As per usual, we'll keep you updated. Source: AppleInsider

Unfortunately, iCloud Services Are Again Down For Some Users

Unfortunately, iCloud Services Are Again Down For Some Users
Nothing found :(
Try something else