You are using an outdated browser. Please upgrade your browser to improve your experience.
by Brent Dirks
November 20, 2012
Parents, this really shouldn’t be a shock – your kids want iOS devices. According to a newly released survey from Nielsen, almost half (48 percent) of kids aged 6-12 in the United States are interested in getting a full-sized iPad in the next six months. That’s up from 44 percent of kids last year. After the new Nintendo Wii U, desired by 39 percent of the surveyed kids, the next three spots belong to Apple products. Thirty-six percent of the kids want either an iPod touch or an iPad mini. And 33 percent want an iPhone. And with buyers 13 and older, the survey results looked somewhat similar. Twenty-one percent are interested in buying an iPad in the next six months. The iPhone is desired by 14 percent of the consumers, while the iPad mini tops the list at 11 percent.

While the iPad is leading the way in the tablet market, non-Apple devices like the Kindle Fire and Samsung Galaxy tablets were also high on the list of desired technology this holiday season. Microsoft’s new Surface tablet does look like it has a long way to go, though. Only 6 percent of children and 3 percent of consumers over 13 were interested in the device. What iOS device can your kids not live without this holiday season? 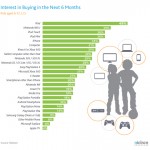 What A Surprise: Kids Really Want iOS Devices This Holiday Season
Nothing found :(
Try something else