You are using an outdated browser. Please upgrade your browser to improve your experience.
by Joe White
December 2, 2012
One month or so ago, @pod2g, @MuscleNerd and more discussed the iOS 6 jailbreak at a Hack In The Box (HITB) panel discussion, which took place in Kuala Lumpur, Malaysia. Though excerpts from the talk have been posted online, a full length four-hour video has now appeared. Out of this the HITB panel on iOS security has been excerpted (which is almost one hour long), and included in this talk are some interesting comments regarding the status of the iOS 6 jailbreak. Below, we've embedded the full video. As iDownload notes, however, here are the major points made: Hopefully, it shouldn't be long until an iOS 6 jailbreak solution is developed. These guys are working towards discovering such an exploit, but as usual, new jailbreaks take time to find, test and develop. As always, we'll keep you posted. The aforementioned video has been embedded below. http://www.youtube.com/watch?v=STAWXGQvmRI&feature=player_embedded 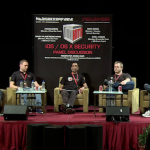