You are using an outdated browser. Please upgrade your browser to improve your experience.
by Bryan M. Wolfe
December 7, 2012
Last night's "Rock Center" interview with Apple CEO Tim Cook covered many topics, including Steve Jobs' death, the iOS 6 maps fiasco, a possible Apple television, and much more. Advertised as the first television sit-down with the relatively new Apple chief, the two-segment interview was held at the company's Grand Central retail store in New York City. Cook used the occasion to go after Samsung over patents, and to discuss moving Mac manufacturing back to the United States. He also become quite emotional when discussing his predecessor's final days. This was about as thorough an interview as anyone will likely get with the head of a company known for their secrecy. As such, it is well worth your time to watch it. Here is the entire interview; if you are having trouble viewing this on an iPad, download the free Rock Center app and view it from there: 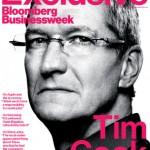