You are using an outdated browser. Please upgrade your browser to improve your experience.
by Bryan M. Wolfe
December 7, 2012
The United States Patent and Trademark Office (USPTO) has issued a first Office action tentatively declaring a key Apple multi-touch patent invalid. This just happens to be one of the patents that Apple claimed Samsung infringed upon, and a jury agreed with earlier this year, according to Foss Patents. U.S. Patent No. 7,479,949 on a “touch screen device, method, and graphical user interface for determining commands by applying heuristics," has been ruled invalid by the U.S. government. This is unofficially called “the Steve Jobs patent,” and covers the very basic make-up of Apple’s signature product, the iPhone. What this invalidation means, at least in the long-term, is unknown. From a legal standpoint, the Office action is being used to determine whether or not the patent’s actual contents are a valid claim of intellectual property. Since being granted the patent in January 2009, Apple had held exclusive right over it. According to the report:

Some people say that first Office actions are partial because they are based only on submissions made by those challenging the patent, and many examiners like to take a tough position early on in order to enable and require the patentee to present the strongest arguments in favor of validity. But it would be a mistake to underestimate the significance of a first Office action. Also, a complete rejection of all claims of a given patent is potentially more devastating than one affecting only some claims.

It is important to note that this is just one of 300 patents that Apple holds on the iPhone. However, “among software patents, the ‘949 patent is probably the most famous one,” that has Steve Jobs’ name attached to it. Were Apple to lose the patent permanently, the company would have to give back some of the $1 billion they were rewarded from Samsung. However, that process could take many years and countless appeals. This is the second time in as many months that the USPTO has issued a first Office action tentatively declaring a key Apple multi-touch patent invalid. In October, a first Office action was filed that preliminarily concluded that 20 claims of Apple’s rubber-banding (over-scroll bounce) patent were invalid. Apple used these claims also in their case against Samsung. We’ll keep you updated. Source: Foss Patents Via: Razorianfly 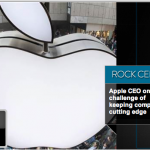