You are using an outdated browser. Please upgrade your browser to improve your experience.
by Aldrin Calimlim
January 29, 2013
It seems like only yesterday when rumors of a 128GB iPad started circulating. Oh, wait, it was only yesterday. And as it happens, today those rumors have been proven to be true by no less than Apple. That's right. In its latest press release, Apple has announced a 128GB version of the fourth-generation iPad with Retina display. As noted by Apple, "The 128GB iPad with Wi-Fi and iPad with Wi-Fi + Cellular models provide twice the storage capacity of the 64GB models to hold even more valuable content including photos, documents, projects, presentations, books, movies, TV shows, music and apps." Philip Schiller, Apple’s senior vice president of Worldwide Marketing, has this to say about the new maximum on-board storage capacity of Apple's bestselling 9.7-inch tablet:

With more than 120 million iPads sold, it’s clear that customers around the world love their iPads, and everyday they are finding more great reasons to work, learn and play on their iPads rather than their old PCs. With twice the storage capacity and an unparalleled selection of over 300,000 native iPad apps, enterprises, educators and artists have even more reasons to use iPad for all their business and personal needs.

The new 128GB versions of the fourth-generation iPad are set to be released a week from now, on Tuesday, Feb. 5. Available in black or white, the 128GB iPad with Wi-Fi model is priced at $799, while the 128 GB iPad with Wi-Fi + Cellular model is priced at $929. All versions of the 128GB iPad will be sold through the Apple Online Store, Apple retail stores, and select Apple Authorized Resellers. So, are you getting a 128GB iPad soon? Source: Apple

Opinion: All Of These Subtle Changes - Has Apple Gone Rogue? 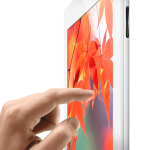 Could A 128 GB iPad Model Be Just Around The Corner?
Nothing found :(
Try something else