You are using an outdated browser. Please upgrade your browser to improve your experience.
by Bryan M. Wolfe
February 26, 2013
Telltale Games is said to be working on some sort of upgrade for the company’s popular Walking Dead: The Game title. However, the new game won’t necessarily be a second season of its episodic series, according to IGN. Talking on IGN’s “Up At Noon” program, writer Gary Whitta says that Telltale has something up its sleeves. Whitta is a screenwriter, author, game designer, and video game journalist. He states:

I can tell you what you already know, which is season two is coming. There’s not much to say because it really is very early ... it’s a way off. But, knowing that it’s a way off, and knowing that people are hungry for more Walking Dead … there may very well be more Walking Dead from Telltale before season two. We may have a little something extra for you between season one and two.

Of course, this tease tells us very little. However, it’s nice to know that an upgrade for the game is being prepared, don’t you think? Here is the entire interview, which may not be appropriate for younger readers: Walking Dead: The Game is universal and available in the App Store. It was one of AppAdvice's Top 10 Best Free iPad Apps Of 2012. 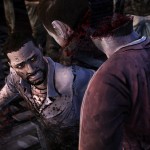 Spoiler Alert - Check Out The Difficult Choices The Players Of Walking: Dead The Game Made In The Final Episode