You are using an outdated browser. Please upgrade your browser to improve your experience.
by Brent Dirks
March 18, 2013
According to one analyst, innovation is what will help Apple roar back from the recent spate of negative press. Morgan Stanley’s Katy Huberty appeared on CNBC saying that Apple’s stock will be going up thanks to a “killer feature” in the so-called iPhone 5S:

I do believe that AAPL is approaching a bottom. As you have heard, they are talking about returning more cash, and we think they will do that in coming weeks. But people don’t own AAPL for that, they own AAPL for innovation. You saw the Samsung [Electronics Galaxy S4 come out last week, that shows you the innovation cards are up for grabs. What is lacking in that product [the S4] is a killer feature. We think that’s where Apple will surprise this year. This [iPhone] 5S cycle this year will be about a killer feature that drives consumers increasingly to the platform, and that increases the value of those 500 million accounts.

I definitely hope Huberty is right. Realistically, Apple has no choice but to provide an innovative feature in its next-generation flagship phone. If Apple sticks to its previous release cycles, the new iPhone’s hardware will be identical, or at least very similar, to the iPhone 5. And even though consumers flocked in droves to purchase the iPhone 4S when it was released in 2011, I don’t think buyers and the press will react well to another “beta” feature like Siri. I’m still holding at out hope that the phone will have improved hardware with biometric and NFC technology as we reported last week. That’s pretty much the only thing that could get me to upgrade. What about you? According to the most recent speculation, the next iPhone will reportedly be released in August. Via: Barron’s 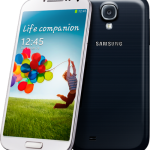 Opinion: Apple Has Nothing To Fear From The Samsung Galaxy S IV
Nothing found :(
Try something else