You are using an outdated browser. Please upgrade your browser to improve your experience.
by Bryan M. Wolfe
March 18, 2013
A former Apple executive has some interesting words for his former employer. Jean-Louis Gassée, who hasn’t worked for Apple since the John Sculley era, believes that Cupertino should be more like ... Microsoft. Indeed, a guy that worked at Apple when the company almost went bankrupt, is now convinced that they should be more like Microsoft. Specifically, Gassée thinks that Apple should emulate Microsoft’s public relations tactics. He states, among other things:

The popular notion is that Apple rose to the top without these tools and tactics, but that’s not entirely true. Dear Leader was a one-man propagandastaffel, maintaining his own small network of trusted friends in the media. Jobs also managed to get exemptions from good-behavior rules, exemptions that seem to have expired with him…

I’m not sure what I make of this. Much of Gassée's prose sounds a lot like a disgruntled former employee that is glad to see Apple, at least being perceived as, on the ropes. At the minimum, his comments seem to be about a bygone era when the biggest thing in technology was Windows 95. While there is no doubt that things at Apple aren’t going as well as previously, I don’t believe that the sky over Cupertino is falling. Instead, a cloud has taken up temporary residence above 1 Infinite Loop. I guess that Gassée lost me as soon as he mentioned Microsoft. The Steve Balmer-lead company hasn’t exactly been setting the world on fire, especially since smartphones and tablets have grown in popularity. Besides, when folks discuss Apple’s perceived weaknesses, they often cite Samsung’s growing success with mobile as one of the reasons for concern. Windows Phone 8? Not so much. This isn’t to say that everything Gassée says is wrong. In particular, I love his suggestion that Apple should be hiring “media assassins” to go after competitors, and point out their weaknesses. I also agree that Phil Schiller’s hit on Samsung and Android last week was ill-timed and came across as defensive. But, like I said, Gassée lost me at Microsoft. The last thing Apple should do is be more like the company that completely missed the Internet and iPod craze, and is still trying to figure out how to make a tablet that the masses can afford and somewhat love. It sounds like a perfect time for a discussion. What are your thoughts on Gassée's comments? 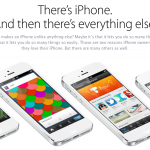