You are using an outdated browser. Please upgrade your browser to improve your experience.
by Aldrin Calimlim
March 14, 2013
Following his tweet of caution last week, it appears that Apple marketing head Phil Schiller has more unflattering remarks about iOS' biggest competitor, Android. The tweet in question linked to a study by online security company F-Secure. According to the study, the majority of mobile malware detected in 2012 was on Android. Reporting on the matter, my colleague Bryan concluded, "It will be interesting to see if Schiller's tweet is the beginning of a more aggressive PR campaign to counter Android’s growing popularity." Apparently, it is. Earlier today, Schiller gave an interview to The Wall Street Journal seemingly for no other reason than to blast Android. Schiller presumably began by stating that, according to Apple's research, the number of users that switched from an Android phone to an iPhone last quarter was four times the number of users that went the other way around. He then went on to criticize the "plain and simple" fragmentation in the Android world:

He added that "Android is often given as a free replacement for a feature phone and the experience isn't as good as an iPhone." The executive said the Android devices suffer in part because different elements come from multiple companies, whereas Apple is responsible for all its mobile hardware and as well as its iOS operating system. "When you take an Android device out of the box, you have to sign up to nine accounts with different vendors to get the experience iOS comes with," he said. "They don't work seamlessly together."

Of course, this is certainly not the first (nor is it the last) time that such sentiments were voiced from Apple's camp. But once you realize that it was given on the eve of the launch of Samsung's new Android-powered flagship phone, then Schiller's "rare" interview makes but perfect sense. Samsung's new flagship phone, the Galaxy S IV, is expected to feature a 4.99-inch SuperAMOLED display, 2 GB of RAM, a 13-megapixel rear camera, a 2-megapixel forward camera, and Android 4.2.2 Jelly Bean. Last year, the Galaxy S IV's predecessor, the Galaxy S III, overtook the iPhone 4S in quarterly sales prior to the launch of the iPhone 5 in September. But by the end of the year, both the iPhone 4S and the iPhone 5 resulted in sales that surmounted the Galaxy S III's. This year, we'll see how things pan out for the Galaxy S IV versus the iPhone 5 and the so-called iPhone 5S, which is rumored to be launched in August. 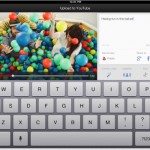