You are using an outdated browser. Please upgrade your browser to improve your experience.
by Bryan M. Wolfe
March 13, 2013
The great folks at iFixit have torn down the new Pebble Watch. What they found was a solid device, but one that can’t be repaired. Calling the $150 Pebble Watch, “impossible” to take apart without breaking its e-ink display, iFixit says the watch includes “tons of adhesive.” This makes it waterproof when performing everyday tasks such as swimming in a pool, or washing dishes. Although the watch's battery cannot be replaced, it should last six to 10 years. The Fullriver-branded rechargeable battery is rated at 3.7 Volts and 130 mAh. Finally, while the Pebble Watch cannot be repaired internally, its band can be changed with ease. The teardown confirms that it uses a standard size band. Internals for the Pebble Watch include: The Pebble Watch received $10.2 million in funding via Kickstarter in 2012. The first shipments left warehouses in January. For more on the Pebble Watch, see: Is Apple Set To Acquire Pebble To Create Their Own Watch?, and Pebble Watch To Arrive In Five Colors, Include SMS And iMessage Integration. 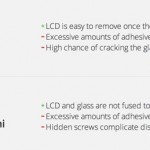 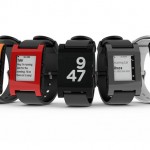 Mossberg: Pebble Watch Shows Promise But Waiting Might Be Wise
Nothing found :(
Try something else