You are using an outdated browser. Please upgrade your browser to improve your experience.
by Juli Clover
April 5, 2013
On April 1, more commonly known as April Fools Day, Orbotix showed off a giant, 3-foot tall Sphero. The ball, which weighs a whopping 150 pounds, was controlled via the iPhone in an impressive video where it crushed everything that it came in contact with. http://www.youtube.com/watch?feature=player_embedded&v=GDuaLOPJm2g As it turns out, Sphero Peacekeeper might not be an just April Fools prank after all, because Orbotix has launched an Indiegogo campaign that offers the giant Sphero up for sale for a cool $10,000. The ball has all of the same features from the original Sphero, only bigger. Much bigger. It’s also encased in a custom painted high-impact polycarbonate shell that will stand up to anything you can throw at it. Like Sphero, you can drive the ball, play games, and entertain pets. According to the campaign, the Peacekeeper version of Sphero comes equipped with two motors that are controlled through a Sphero board and an iPhone using Bluetooth. The marine grade batteries, which will last for two hours of driving, must be charged by taking the Sphero apart. Due to its size, it is fully capable of crushing objects, pets, and small children. I’m pretty sure I wouldn’t want to run my foot over with the Sphero Peacekeeper either, and as it can build up momentum, I’d hate to see the damage this thing would cause after going down a hill. Can’t afford the $10,000? Don’t worry, you can still contribute to the campaign. For a $130 pledge you can get a standard Sphero, and for $250, you can snag a limited edition clear plastic Sphero. $2,000 will get you a Peacekeeper for a week, and for $5000, Orbotix will fly you out to Colorado to play with a group of lions using the Peacekeeper. How amazingly cool is that? 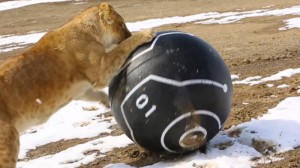 You can check out the rest of the Sphero Peacekeeper rewards or give a donation on the Indiegogo page.
Nothing found :(
Try something else