You are using an outdated browser. Please upgrade your browser to improve your experience.
by Bryan M. Wolfe
April 15, 2013
AT&T customers are likely to get the first crack at buying the Samsung Galaxy S IV. An internal Staples memo says that the company’s new handset will launch there on April 26, followed by a debut at T-Mobile one week later. Verizon customers must wait until May 30, according to Engadget. 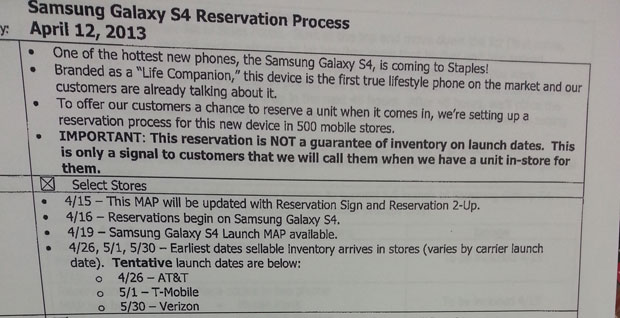 First announced in March, Samsung’s latest handset will be available for preorder at AT&T beginning tomorrow, April 16. To date, the second largest carrier in the U.S. has yet to officially announce a release date for Samsung's next flagship smartphone. The Samsung Galaxy S IV has a 5-inch 1080p SuperAMOLED display, a 13-megapixel rear camera, a 2-megapixel front camera, and 2GB of RAM. In addition, it’s touted as the first, and currently only, smartphone with an octo-core processor. The Galaxy S III proved quite popular with customers in 2012, and for a time, outsold the iPhone. However, early reviews of the Galaxy S IV haven't been kind, with one analyst stating that it was "no match" for the iPhone 5. Regardless, Samsung will have a few months to get the new phone in users' hands. The so-called "iPhone 5S" isn't expected to launch until this summer. See also: Going Rogue: The Next iPhone Could Make The Samsung Galaxy S IV Look Like A Turtle, and Apple Emerges With New iPhone Promotional Campaign Following Galaxy S IV Launch.