You are using an outdated browser. Please upgrade your browser to improve your experience.
by Joe White
April 23, 2013
Logitech's newest case, called FabricSkin, can provide iPad owners with a Microsoft Surface-like fabric keyboard for their 9.7-inch tablet. One of the major selling points of the Microsoft Surface is its Type Cover, which allows users to type on a physical keyboard while on the go. Though the iPad's virtual keyboard works well, it can also be troublesome - especially when users attempt to undertake a sizeable amount of work. In the keyboard department, Surface owners appear to get the best of both worlds, since Microsoft ships the tablet with a physical keyboard that is nevertheless thin and ultra portable. However, thanks to Logitech, iPad owners can now enjoy a similar experience. Like the Surface's case-cum-keyboard, Logitech's FabricSkin is a stylish, slim case that folds out to reveal a fabric keyboard. This keyboard features full size keys, is water resistant, and can connect to an iPad via Bluetooth. The case also includes built in magnets that will wake the iPad when the front cover is opened, and put it to sleep when the case is closed shut. FabricSkin owners can charge their case via micro USB, though they won't need to do so very often. Based on an average of two hours of typing per day, Logitech estimates that following a full charge, FabricSkin will last for three months. Logitech's new accessory is compatible with the second-, third-, and fourth-generation iPad, and is available in six separate colors. FabricSkin can be preordered online for $149.99. For more information on Logitech's iDevice accessories, see: Logitech Announces New Keyboard Folio Lineup For iPads, Logitech Taking Orders For Ultrathin Keyboard For iPad mini, and Logitech's New Products For 2013 Include An Illuminated Keyboard For iOS Devices. 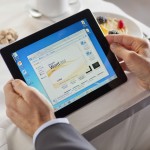 Microsoft Office For iOS Purportedly Delayed Until Fall Of 2014
Nothing found :(
Try something else