You are using an outdated browser. Please upgrade your browser to improve your experience.
by Bryan M. Wolfe
April 5, 2013
In April 2010, my attempt to purchase a first-generation iPad was a difficult one. Hard to believe, but at the time, the only way to purchase Apple’s tablet was to visit an Apple retail store, or visit a select Best Buy. Preorders, in stores and otherwise, were still an iPad generation away. At the time, my nearest Apple store was 90 miles away; the nearest Best Buy (with an Apple Shop, anyway), was 60 miles down the road. It took me three long trips, coupled with plenty of aggravation, until I finally got my hands on an iPad. Nonetheless, I found that experience exciting, and shall I say, eventful. After all, with all of that running around, when I finally did get my iPad, it felt like I had joined an exclusive club, and I was cool with that. For good or bad, the electronics shopping experience is changing. This is partially due to the Internet. However, Apple also helped change how many of us now shop for products. Today, even the most popular products seem to be available everywhere, even on launch day. Therefore, I wasn’t surprised when Samsung announced that they would soon be opening Samsung Experience Shops at 1,400 Best Buy locations. This makes sense, especially for Best Buy. The last of the national big box retailers continues to struggle thanks to Amazon, and other online stores. Plus with Samsung overtaking Apple in the coolness department, in some circles anyway, the plan sounds about right. It may sound funny now, but the store within a store concept wasn’t always a successful one for Apple. In fact, it took Apple and Best Buy four times to perfect it. In the mid-1990s, Apple attempted to sell Performas at Best Buy. When that failed, a new partnership was created around iMacs. When that didn’t work, a variety of Macs was offered to consumers at the retailer. That too failed. In 2006, Apple decided to teach Best Buy employees about Apple computers. Prior to this, there was no interaction between the staff of both companies. The rest, they say, is history. Best Buy was one of the first companies to offer the iPhone in 2007. Three years later, it was the only third-party retailer to offer the first iPad. Today, most, but not all, Best Buy locations include an Apple Shop. Samsung’s announcement confirmed that “Samsung Experience Consultants” would be working closely with Best Buy employees. Those consultants will assist customers with mobile phone purchases and activations. In addition, they will offer product demonstrations, account setup, warranty registration, and post-purchase support. Sound familiar? Whether Samsung Experience Shops at Best Buy prove successful remains an open question, of course. As Brent Dirks mentioned, with plenty of tongue and cheek:

Instead of building its own stores, it is much more cost effective for Samsung to partner with the established retailer. Now, if Samsung can get consumers to actually shop at Best Buy …

My personal opinion is that it will work. Despite claims to the contrary, Samsung’s new initiative sounds just like the concept Apple perfected nearly a decade ago. That isn't necessarily bad, just the reality. As much as I miss those days when finding an Apple product was nearly impossible, I recognize the changing landscape. In other words, what’s your next move, Apple? 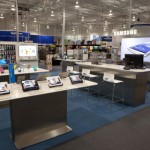 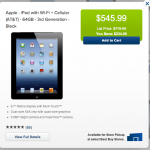 Best Buy Is Offering Retina Display iPads At 30 Percent Off Retail
Nothing found :(
Try something else