You are using an outdated browser. Please upgrade your browser to improve your experience.
by Aldrin Calimlim
April 8, 2013
Last week, we reported (and consequently made an April Fools' joke about) the U.S. Patent and Trademark Office's refusal to grant the "iPad mini" trademark to Apple. Now, it appears that the agency has withdrawn its initial refusal even without any objections from the iDevice maker. As noted by MacRumors, the USPTO's withdrawal is detailed in a supplemental office action dated April 3 but made public just recently:

The document, which is embedded above, states that the USPTO has withdrawn both its descriptiveness refusal and its specimen refusal for Apple's "iPad mini" trademark application. The USPTO's descriptiveness refusal held that the "iPad mini" name was "merely descriptive." Specifically, it claimed that the term "mini" in "iPad mini" simply described the smallness of Apple's mini tablet. As for the agency's specimen refusal, it argued that the webpage specimen submitted by Apple to demonstrate the use of the "iPad mini" trademark was not acceptable. But along with its withdrawal for its twofold initial refusal, the USPTO has issued an advisory that it can still refuse to register the trademark if Apple fails to submit a specific disclaimer. The disclaimer in question should state that Apple does not claim exclusive rights to use the "mini" part of the "iPad mini" name. 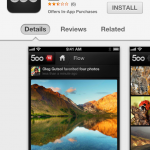 Apple Reportedly Pulling OS X 10.9 Engineers To Work On Behind-Schedule iOS 7
Nothing found :(
Try something else