You are using an outdated browser. Please upgrade your browser to improve your experience.
by Bryan M. Wolfe
May 30, 2013
On the day that Apple has released the curious iPod touch 16GB, comes some additional news. The Loop’s Jim Dalrymple is reporting that Apple has now sold 100 million iPod touch units. First released in 2007, the iPod touch is currently in its fifth release. The current model arrived in September, and includes a 4-inch screen, IPS display, and Apple’s A5 chip. The iPod touch also includes support for recording 1080p video and panoramic still photos via a rear camera, support for Apple's Siri, and an LED display. And in a first, it is available in multiple colors. These include: slate, silver, pink, yellow, blue, and Product Red. Earlier today, Apple quietly launched a less expensive iPod touch 16GB. Priced at $229, the model has no rear-facing camera. It also comes without the iPod touch loop. The iPod touch lineup also includes the $299 32GB, and $399 64GB models. See also: Opinion: Thinking About A $99 ‘iPhone mini’ Keeps Bringing Me Back To The iPod nano, The WWDC Keynote Should Reveal New Macs, But Not New iOS Devices, and Here Is One Apple Product That Should Be Refreshed At WWDC. 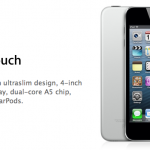