You are using an outdated browser. Please upgrade your browser to improve your experience.
by Aldrin Calimlim
June 21, 2013
A couple of photos that purportedly show the interior and the rear shell of the so-called iPhone 5S have just emerged online. While these photos reveal little beyond what have already been rumored, they give us a better idea of what to expect when the upcoming device launches later this year. MacRumors, which received the photos from an unidentified source, mentions several noteworthy portions of the leaked images. For one thing, the logic board shown in the photo of the device's interior matches the redesigned logic board that was reported by Mac o Takara last week. On the logic board, an A-series name label is notably absent, although a date code on the main chip has MacRumors speculating thus:

A date code visible on the bottom of the main chip reads "1243", signifying that the chip was manufactured in the 43rd week of 2012, corresponding to late October. This would seem to be much earlier than would be expected for a new handset, so it is unclear whether this is a very early prototype that could still be running the same A6 chip found in the iPhone 5 or if it is in fact a different chip.

Another component of note is the battery, which is shown as having a more recent Apple part number and a higher capacity compared to those of the iPhone 5. As for the other photo, which shows the device's rear shell, its most notable portion is the pill-shaped window, instead of a round window, for the LED flash. This hints at the rumored likelihood of a dual LED flash for the next-generation iPhone. Apple is expected to launch two new handset models this year. One is the so-called iPhone 5S, and the other is a cheaper version in plastic casing, which is rumored to come in a range of colors.

The Next iOS 7 Beta Could Arrive On Monday 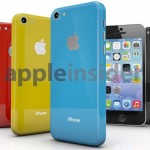 Case Makers Are Gambling That Their Designs Match Those Of Apple
Nothing found :(
Try something else