You are using an outdated browser. Please upgrade your browser to improve your experience.
by Joe White
June 20, 2013
China's smartphone market is booming, as is the number of iPhone and Android-powered handsets available in the country, according to a recent study by IDC. More specifically, the firm notes that in Q1 2013, Apple's iPhone had a 9 percent share of China's expanding smartphone market. As such, the iPhone is now ranked the fifth largest smartphone vendor in China, the firm notes, adding that the company's iPhone 4 grew by 211 percent compared with an overall market growth of 117 percent. Antonio Wang, the Associate Director of Computing Systems Research Group for IDC China, noted that:

In China’s smartphone market, Samsung has switched its marketing focus from competing with Apple for high-end market to maintaining its high-end market share, and is starting to strive for market for products under USD 200, which has so far been dominated by domestic brands. However, Apple leverages the incentive policies for channels to inspire the shipments of iPhone 4, further expanding its user base.

As the No. 1 smartphone vendor in China, Samsung has indeed secured its 19 percent share of the Chinese smartphone market through retailing handsets for under $200. In fact, almost half (47 percent) of the under-$200 smartphones sold in China are made by Samsung. Apple's anticipated low-cost iPhone, which is expected to launch later this year, could therefore help the company on this front. IDC continues, however, to note that 5-inch smartphones are becoming more popular in China, suggesting that a low-cost iPhone - if it retains or even reduces the current-generation's 4-inch screen size - may not be large enough to satisfy such emergent demand. In Q1 2013, an approximate 7.5 percent of smartphones in China had screens of 5-inches or above. Before the year is out, IDC estimates that this figure could rise to as much as 20 percent. Apple's share of the smartphone market in China is nevertheless growing, though whether its next-generation iDevice announcements will have any bearing on this growth remains to be seen. We'll keep you updated with further information as we receive it. Image credit: Flurry Analytics 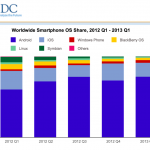 Apple, Google Dominate 92.3 Percent Of The Global Smartphone Market
Nothing found :(
Try something else