You are using an outdated browser. Please upgrade your browser to improve your experience.
by Aldrin Calimlim
June 18, 2013
From Senior Vice President of Industrial Design to Senior Vice President of Design, Jony Ive's official executive title at Apple has just been shortened. Or as 9to5Mac puts it: "flattened," alluding, of course, to Ive's "flat" redesign of iOS, unveiled at last week's WWDC keynote address. But even as Ive's title has been flattened, as it were, in terms of length, the dropping of the "Industrial" part actually signifies a broadening of his responsibility at Apple. Ive became the Senior Vice President of Industrial Design at Apple in 1997, shortly after the return of Steve Jobs at the company. Since then, he had made a name for himself as the lead designer behind most of Apple's hardware products, including the iMac, MacBook Pro, iPod, iPhone, and iPad. In late October last year, after the ouster of Scott Forstall as Apple's Senior Vice President of iOS Software, Ive's responsibility was extended to provide "leadership and direction for Human Interface (HI) software teams across the company." Apparently, though, the official switch in Ive's executive title took place just last week, following the launch of the first major product to come out of Ive's "leadership and direction" of Apple's HI software teams: iOS 7. See also: Jony Ive Reportedly Tapped Apple's Marketing Team For iOS 7 Icon Redesign and This Is What Would Happen If We Let Jony Ive Redesign Everything. 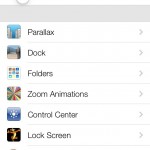