You are using an outdated browser. Please upgrade your browser to improve your experience.
by Bryan M. Wolfe
July 25, 2013
There is a new phishing scam making its way around the Web that relates to the continued shutdown of the Apple Developer site. The scammers are using emails to convince users to change their Apple ID password, according to ZDNet. According to the report, the outage had lead to a “flood of phishing emails,” like the one shown below. 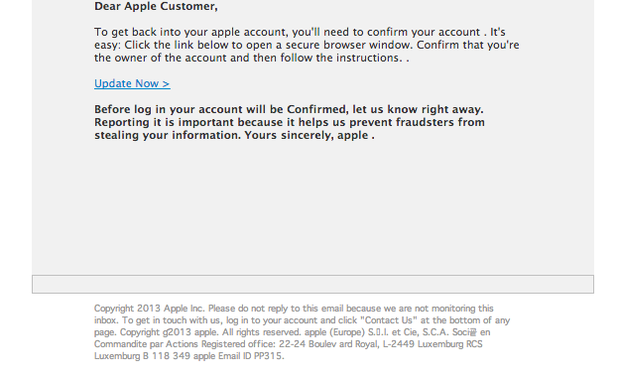 Apple is not sending out emails requesting that users change their password. Instead, the company has created a new status page to display the availability of developer systems. To date, the only services back online are iTunes Connect, and the Bug Reporter. As ZDNet notes:

Users have taken to Twitter to warn others of the phishing attacks, and security firm Kasperky Lab has found that Apple-related phishing scams have skyrocketed in the last six months, with scammers focused on stealing login credentials and financial data.

Again, if you receive an email like the one shown above, delete it. See also: Apple Releases A Status Update Regarding The Weeklong Developer Site Shutdown, Security Researcher May Be The 'Intruder' Behind Apple's Developer Center Shutdown, and Apple Confirms That Its Developer Center Has Been Down Because It Was Hacked.

Apple Releases A Status Update Regarding The Weeklong Developer Site Shutdown
Nothing found :(
Try something else