You are using an outdated browser. Please upgrade your browser to improve your experience.
by Joe White
July 19, 2013
One further individual in China has been electrocuted while charging an iPhone handset, according to a recent report from the Beijing Evening News. The man, Wu Jian Tong, was "suddenly shocked" by his charging smartphone, and fell into a coma as a result. ZDNet offers an accurate translation, and explains:

Wu Jiantong, 30, apparently had yelled "I'm getting shocked" when he was connecting his iPhone 4 to a charger, which was later found to be a counterfeit or third-party product. His sister related the incident, adding that she went to his rescue by pulling the charger out of the socket.

"I then felt needle-like pains on my fingertips. The current was running from my finger, through to my arm and body, and to the foot," said Wu's sister. By then, her brother was not responsive, and was twisting and foaming at the mouth.

Medics then gave Wu cardiopulmonary resuscitation (CPR) before rushing him to a nearby hospital, where he remains in a coma due to a lack of oxygen supply to his brain. "It was no doubt an electric shock," said Wu's doctor at the Hai Dian Hospital in Beijing. According to his sister, Wu's iPhone charger was not a product manufactured or authorized by Apple, and as such reports are naturally suspicious of the third-party product rather than of Apple's smartphone. The news comes on the same day the South China Morning Post claims that Ma Ailun, the 23-year-old Chinese woman who suffered a fatal electric shock while charging her iPhone earlier this week, also may not have been using an authorized charger:

According to Xiang Ligang, a telecommunications expert interviewed by CCTV, the charger Ma had been using may have been a "knockoff" - a fake. "Knockoff chargers sometimes cut corners," Xiang said. "The quality of the capacitor and circuit protector may not be good, and this may lead to the capacitor breaking down and sending 220 volts of electricity directly into the cell phone battery."

Xiang said that normally, the electric current from an overloaded charger would overheat the phone’s casing, damaging the circuits inside and rendering the device unusable. In the case of Ma’s iPhone 4, however, authorities said the phone could still be started normally despite severe traces of burning on its exterior. The phone’s data cable, charger, and plug were all intact.

Both incidents are still being investigated by local police, and in the case of Ma Ailun's death, at least, Apple has offered its full cooperation and most sincere condolences. We'll keep you updated with further information as we receive it. In the meantime, see: DigiTimes Claims Retina-Equipped iPad mini Could Launch This Fall, After All, Evernote For iOS Updated With Shortcuts Feature, Skitch Integration And More, and Download It Now: VLC Media Player Makes Its Triumphant Comeback On iOS. 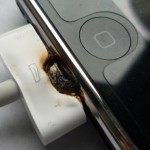 IDC Reports Impressive iPhone Growth In China
Nothing found :(
Try something else