You are using an outdated browser. Please upgrade your browser to improve your experience.
by Brent Dirks
July 2, 2013
Making the news official, Pebble has confirmed an exclusive partnership with Best Buy to launch its smartwatch. The Pebble is available on Best Buy’s site now and will be in brick-and-mortar store locations on Sunday, July 7.

“It’s been so rewarding to see and share the great things our early backers and development partners have done with Pebble already,” says CEO Eric Migicovsky. “Their work and our evolving app ecosystem has kept demand very high. Best Buy’s partnership with us is a big step towards meeting that demand.”

The watch, which began as a Kickstarter project last year, finally shipped to early backers in February. Since then, Pebble has most notably added integration with RunKeeper and released an updated developer SDK that allows for two-way communication between a watch and smartphone. Along with new packaging for Best Buy, the companion iOS app was also updated last week with some consumer-friendly changes. The initial setup of the Pebble is made easier with a step-by-step walkthrough. Version 1.1 of the app also adds a number of tutorials and a guide that highlights Pebble watchapps and other resources. The watch retails for $149.99. Currently, only the black version will be available at Best Buy. Cherry Red Pebbles are promised in stores next month. The three other colors – orange, gray, and white - can be preordered from Pebble’s site. 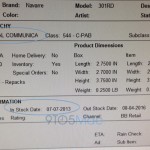 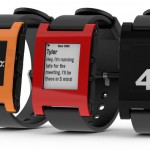 Apple's iWatch Could Be Incoming As The Company Files For Another Trademark
Nothing found :(
Try something else