You are using an outdated browser. Please upgrade your browser to improve your experience.
by Joe White
July 24, 2013
During Apple's recent financial results conference call, during which the Cupertino, Calif. company announced record iPhone sales, chief executive officer Tim Cook was asked about the anticipated "iOS in the Car" feature, which will allow users to connect an iDevice to an in-car display, and access apps and services (such as one's Phone, Messages, Music, and Siri) while on the road. In particular, Cook was asked about the potential of iOS in the Car. He explained in response:

I see it as very important. It’s a part of the ecosystem. Just like the App Store is a key part of the ecosystem. And iTunes, and all of our content are key. And the services we provide from messaging to Siri and so forth - having something in the automobile is very, very important. It’s something that people want, and I think Apple can do this in a unique way - better than anyone else. It’s a key focus for us.

As a reminder, here's how Apple describes the feature:

iOS in the Car seamlessly integrates your iOS device - and the iOS experience - with your in-dash system. If your vehicle is equipped with iOS in the Car, you can connect your iPhone 5 and interact with it using the car’s built-in display and controls or Siri Eyes Free. Now you can easily and safely make phone calls, access your music, send and receive messages, get directions, and more. It’s all designed to let iPhone focus on what you need, so you can focus on the road.

Support for iOS in the Car has already been pledged by a number of car manufacturers, including Acura, Mercedes-Benz, Infiniti, Ferrari, Chevrolet, Hyundai, Kia, Volvo, Opel, and Jaguar, and from what we understand, Apple is planning on launching the feature formally in 2014. This will, however, require a minor software update in addition to iOS 7 - perhaps iOS 7.1, or iOS 7.2 - which will prime iOS in the Car accordingly. Are you as excited as Tim Cook for the potential of iOS in the Car? See also: Groupon's Breadcrumb POS Updated With Groupon Voucher Redemption Feature, The Race Is On: Nike+ Running App Updated With Challenges Feature, and Cydia Tweak: HomeArtwork Makes Your Wallpaper Match Any Music That's Playing. 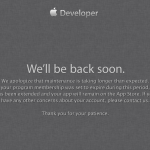 Apple Comments On Developer Portal Outage, Promises To Be Back Soon
Nothing found :(
Try something else