You are using an outdated browser. Please upgrade your browser to improve your experience.
by Bryan M. Wolfe
August 27, 2013
Have Apple engineers been drinking too much champagne ahead of the iPhone 5S and iPhone 5C launch? How else can one explain the strange state of iOS 7 heading into the U.S. Labor Day weekend? Apple first introduced iOS 7 in June. Since then, it has released six betas to developers. While that should be more than enough to get the kinks out before releasing iOS 7 to the public, think again. The first iOS 7 beta wasn’t compatible with the iPad. The sixth version wasn’t even a full beta. Instead, it was used to patch a hole in iCloud. Therefore, since June 10, there have been exactly four iOS 7 betas for the iPad and iPad mini, and five for the iPhone/iPod touch. In a typical year, five betas would be the norm. Call me crazy, but this isn’t exactly a typical year. Most in the technology community may be sold on the radical new redesign that is iOS 7. Once you get past the power users, however, Apple has a lot of explaining to do. That will be much harder to do given the current state of iOS 7 in the three month beta process. Numerous developers in recent days have told us that iOS 7, especially on the iPad, isn’t anywhere near ready for a public launch. Screen locks, strange fonts, and incorrect image placements are just some of the issues we’ve heard about the sixth iOS 7 beta. That version was released way back on Thursday, Aug. 15. On the iPhone, iOS 7 appears much more solid. Still, even here most developers we’ve spoken to hope that Apple releases one more beta before launching the final, gold master (GM) version. Sept. 10 is now just two weeks away. The likelihood that Apple will release a final beta version to developers gets shorter as each day ticks by. Ever since Apple delayed the launch of an iOS 7 beta for iPad by one week, I had a gut feeling that something wasn’t quite right. My instincts again peaked when Apple failed to include even one iPad screenshot with iOS 7 installed on its website – a situation that continues to this day. The latest rumors suggest that Apple won’t be releasing iOS 7 for iPad until its October event. Given the current state of the iOS 7 beta process, I hope this is true. Otherwise, Apple could have a real problem on its hands, especially with users that are already adverse to change. Hopefully, we'll be hearing from Apple by way of another iOS 7 update very soon. See also: An Update On When To Expect New Apple Devices, iOS 7 And More, and Apple Revamps Its Education Web Page Ahead Of iOS 7 Launch. 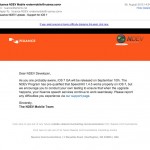 Apple May Publicly Release iOS 7 On Sept. 10, According To Nuance Developer Email 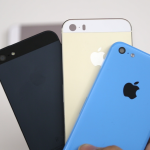