You are using an outdated browser. Please upgrade your browser to improve your experience.
by Bryan M. Wolfe
August 20, 2013
Traditionalists may be unhappy that Apple is about to release a mid-price iPhone. Nevertheless, no one is denying that the move could prove to be a popular one, especially in China. According to Morgan Stanley’s Katy Huberty, the launch of the “iPhone 5C” could make Apple No. 1 in the world’s largest consumer market. The analyst bases this opinion on a new AlphaWise poll of 2,000 Chinese mobile phone owners, which was first published by Fortune. Of those polled, just 23 percent of potential smartphone buyers would buy an iPhone at this time. However, this changes when a budget iPhone is thrown into the mix. Huberty notes that Apple’s market share in China could jump by 13.3 points thanks to the iPhone 5C. Better still, it could help reduce Samsung’s market share in the country by 6.7 percent. Were Apple to finally sign a contract with China Mobile, its position would improve even more. In this case, Apple’s market share in China would rise 19.3 points, while Samsung’s would be lowered by 11.3 percent. China Mobile is the largest cellular provider in the world with 400 million subscribers. Despite many attempts, Apple has yet to secure an iPhone contract with the company. 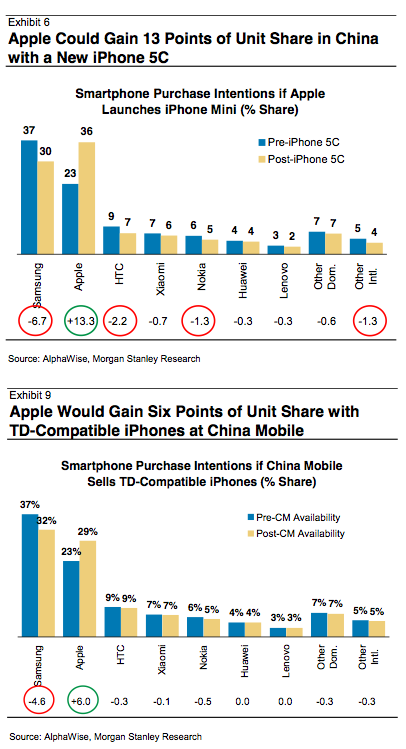 Huberty has long been bullish on the arrival of a mid-price iPhone as it relates to China. In February, the analyst said that a less expensive iPhone would add another 20 percent to the 10 percent Chinese market currently enjoyed by the iPhone 5. Earlier this summer, Huberty stated that the number of Apple users could jump to more than 600 million by the end of the year. If correct, this would be an increase of 40 percent year over year. As a reminder, Apple is likely to unveil the iPhone 5C alongside the "iPhone 5S" on Sept. 10. For more on the iPhone 5C, see: The WSJ Confirms That Two New iPhone Models Are Coming 'As Soon As Next Month', and The iPhone 5 To Become Only The Second Model Retired After Just A Year. Photo: Creative Shift 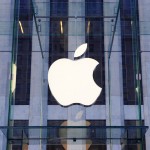 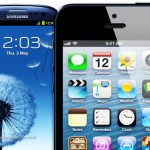 More Samsung Smartphone Owners Are Switching To iPhones
Nothing found :(
Try something else