You are using an outdated browser. Please upgrade your browser to improve your experience.
by Joe White
September 11, 2013
Apple is set to add a number of new backgrounds to our iDevices with iOS 7, however if you can't wait until the software's release, it's possible to install Apple's iOS 7 wallpapers on a pre-iOS 7 iDevice right now. Hosted at Macmixing, the full resolution wallpapers can be downloaded quickly and easily. There are plenty of new backgrounds to choose from, including landscapes, outer-space images, neutral backgrounds, and more. As a reminder, Apple is set to release iOS 7 next Wednesday, Sept. 18, and a Gold Master (GM) version of the prerelease software reached registered iOS developers shortly after the company's recent iPhone media event concluded. We'll keep you updated with further information as we receive it. In the meantime, see: Apple's iPhone 5s, iPhone 5c To Launch With Japan's NTT DoCoMo, In China, The iPhone 4 Is Apple's True Low-Cost Handset, and Apple Vice President Greg Joswiak Talks iPhones, iOS 7 With Employees. 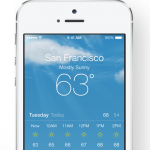