You are using an outdated browser. Please upgrade your browser to improve your experience.
by Bryan M. Wolfe
October 8, 2013
The iPhone 5s is, as the name suggests, a modest upgrade. Nonetheless, the new handset is likely to help push Apple’s gross margins above 40 percent for the first time in a year, according to AppleInsider. Since the iPhone 5 and iPad mini launched in September 2012, Apple has experienced declining margins. As Maynard Um of Wells Fargo Securities notes, this is typical following a significant iPhone refresh. For example, Apple’s gross margins dropped following the release of the iPhone 3G, iPhone 4, and iPhone 5. By contrast, they jumped after the iPhone 3GS and iPhone 4s arrived. Apple's gross margins last reached 40 percent during the third quarter of 2012. Since then, they have fallen to 36.9 percent in the third quarter of this year. 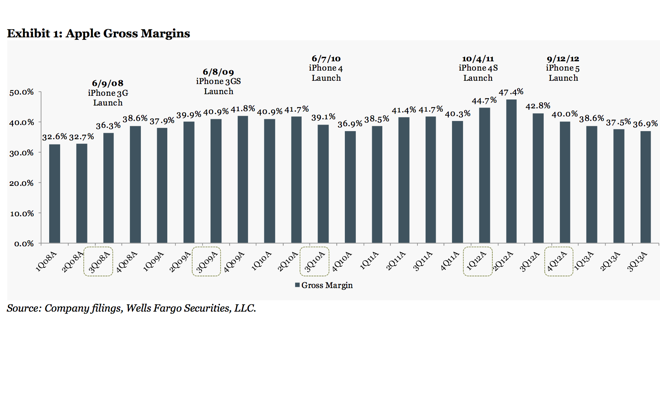 The iPhone 5s includes an A7 chip with 64-bit architecture, an M7 motion coprocessor, Touch ID, and a better camera. It arrived in stores on Sept. 20, along with the iPhone 5c. Wells Fargo has reiterated its “outperform” rating for AAPL stock. Its valuation range for the stock is between $525 and $575 per share. For more on the iPhone 5s, see: It's iPhoneography: NatGeo Photographer Captures Scotland With His iPhone 5s, Apple's iPhone 5s Is Now The No. 1 Handset With All 4 US Carriers, and Gyro-gate? Apple's iPhone 5s Motion Sensors Shown To Be Hugely Inaccurate.

It's iPhoneography: NatGeo Photographer Captures Scotland With His iPhone 5s