You are using an outdated browser. Please upgrade your browser to improve your experience.
by Bryan M. Wolfe
October 14, 2013
There was a time when buying an Apple product meant visiting an independent computer retailer. Those days are nearly over thanks to the rise of Apple retail stores. The latest independent retailer to close in the United States is MacOutfitters, a 22-year old Apple reseller, according to ZDNet. Based in Doylestown, Pa., MacOutfitters has three locations, including two around Philadelphia, and one north of Pittsburgh. In addition to selling Apple products, the company offers training courses, and repair services. In an email to customers, MacOutfitters notes:

I am sorry to announce that all MacOutfitters locations are closing permanently. This has been a very difficult decision for us. The ever-changing market for computer goods and services has always been challenging, however, the last several years have been particularly difficult for our company. We have found that we can no longer be profitable providing the level of service that we have always strived to provide, and that you have come to expect. It has been our great pleasure to serve you for nearly 22 years. We have been a part of some of the most exciting technology innovations ever seen. We will miss those aspects of the business very much. Thank you so much for your loyalty over the years, we wish you the very best. Very truly yours, Jim Habel, President and all the MacOutfitters team

This news follows closings of other Apple resellers in recent years, including Elite, and MACadam. ZDNet notes that of the larger independent Apple retailers, only two remain in the U.S., including Tekserve, and Springboard Media. I absolutely love visiting Apple retail stores, as millions of other do too. A May 2013 survey, for example, showed that Apple stores accounted for more sales per square foot than any other retailer in the U.S. I’m also sad to see a company like MacOutfitters have to close due to declining margins, e-commerce, and Apple’s own stores. Shopping at store.apple.com is an enjoyable, quick experience. However, talking to an expert in person before making a purchase is sometimes best. Apple retail stores obviously fill that void. The number of Apple retail stores has grown significantly since the first one opened in 2001, rising to around 415 in 2013, including 253 in the U.S. However, not everyone lives in close proximity to an Apple retail store location. As Fortune noted earlier this month, this isn’t going to change anytime soon. I’ve visited the MacOutfitters in Warrington, Pa. on many occasions since the location first opened in 2011. I’m sad to see it go, and wish its employees the best. 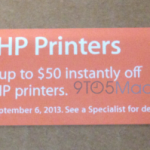 Microsoft Mini Stores Are Coming To Best Buy, Sound Familiar?
Nothing found :(
Try something else