You are using an outdated browser. Please upgrade your browser to improve your experience.
by Bryan M. Wolfe
November 11, 2013
Like many, I stood in line for an iPad Air when it launched earlier this month. As someone who writes about Apple each day, I had no other choice. After eight days with my new device, I’ve come to one undeniable conclusion: Were it not for my job, there was absolutely no reason to upgrade. Don’t get me wrong. The iPad Air is wonderful, both with its thinner form factor and increased speed. However, it isn’t that much better than the iPad with Retina display, which it replaced. For good measure, I also compared it to my friend’s iPad 3. Yes, there was a noticeable speed difference between the two devices. Was it enough to truly matter? Not so much. In the past two months, I jumped one generation for both my iPhone and iPad. Despite being an “s” model, I have found the iPhone 5s much better, comparatively speaking, than the iPhone 5. By contrast, the differences between the iPad with Retina display and iPad Air are minimal at best. For one, unlike the iPhone 5s, the iPad Air doesn't come with Touch ID. This omission is unfortunate, especially when you consider that Apple did bring the A7 processor and M7 coprocessor to both devices. I also want to note that the iPad Air isn’t that much lighter than its predecessor. Since I live on the east coast, I was able to purchase my iPad Air before my editor in the central time zone did. His first question to me via text when I got home from the store was whether the device felt that much lighter. It doesn’t. In fact, once you throw on a case, the difference is even less noticeable, or important for that matter. Finally, there’s the speed issue. Yes, the iPad Air is fast. However, it isn’t that much faster than its predecessors. Here’s my advice. If you own at least an iPad 3, think twice before upgrading. Otherwise, you might be disappointed when the newness wears off. For new tablet buyers and those who own a first- or second-generation iPad, be sure to get an iPad Air as soon as possible. You'll be glad that you did. See also: A New IHS Teardown Shows Apple's iPad Air Costs Less To Produce. 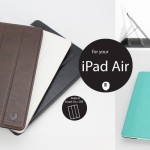 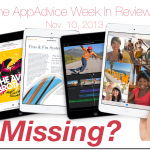 The AppAdvice Week In Review: The Missing iPad mini With Retina Display
Nothing found :(
Try something else