You are using an outdated browser. Please upgrade your browser to improve your experience.
by Bryan M. Wolfe
November 26, 2013
The App Store search engine now leads to improved results for misspelled queries with small typos. In addition, searchers looking for an app they know by name, but are unsure if it has spaces in the title, are also seeing better results, according to TechCrunch. According to the report, Apple implemented some algorithm changes a few weeks ago. These could “lead to increased app downloads for affected developers, particularly those with hard-to-spell or lengthy titles, as many are only now beginning to realize.” Earlier this year, App Store SEO firm SearchMan concluded that Google Play does a better job at search when compared to the App Store. SearchMan CEO Niren Hiro recently tested Apple's new algorithm. He found the results "had definitely shifted, though not always for the better." As TechCrunch explains:

In the case where a misspelling returned few results, like “newz” which had 9 hits or “camara” which had 862, there was a dramatic improvement. But he spotted something else, too: there appears to be a cap of roughly 2,220 results on the misspelled words right now, which is why you see that misspelled keywords like “shoping” and “pocker” are actually seeing fewer results than before. This is likely the result of the App Store now correcting for the misspelling instead of looking for the exact keyword match.

Even with these modest tweaks, no one is going to accuse Apple of overtaking Google in terms of search capabilities. Nonetheless, it is a step in the right direction.

Still, the improvements should be positively received by the majority of the iOS developer community, except of course for the App Store equivalent of a domain name squatter, who may have been erroneously benefitting from users’ typos and mistakes until now.

Have you noticed any changes to the App Store's search function? See also: A First For The App Store: Apple Features Clumsy Ninja With Embedded Game Trailer, Apple’s App Store Leads, But Each Of The Big Three Could Be Improved, and Apple Is Promoting Its Native Apps And Services In App Store Search Results. 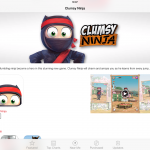 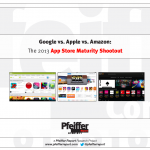 Apple’s App Store Leads, But Each Of The Big Three Could Be Improved
Nothing found :(
Try something else