You are using an outdated browser. Please upgrade your browser to improve your experience.
by Bryan M. Wolfe
December 23, 2013
If you’re hoping Apple releases iOS 7.1 before the end of the year, think again. BGR reports the public won’t receive the update until sometime in March. They cite Apple’s upcoming launch of the new iOS in the Car feature as the reason for the delay. The report notes that Apple’s testing partners just received iOS 7.1 beta 3. This comes 10 days after developers first got a crack at iOS 7.1 beta 2. Both versions are said to include “several important bug fixes in addition to some new features.” Apple launched iOS 7.1 beta 1 back in November, and as we explained at the time:

Changes made in iOS 7.1 beta 2 are indeed minor, as you'd expect. Bug fixes for tones have been applied, and the Touch ID options in the built-in Settings app have also been moved from the General tab over to the application's main menu.

Earlier this month,  9to5Mac said that iOS 7.1 beta 2 included a toggle button in the Settings app labeled “Car Display.” Back in the summer, Apple CEO Tim Cook noted that iOS in the Car is one “key focus” of Apple's, explaining:

I see it as very important. It’s a part of the ecosystem. Just like the App Store is a key part of the ecosystem. And iTunes, and all of our content are key. And the services we provide from messaging to Siri and so forth – having something in the automobile is very, very important. It’s something that people want, and I think Apple can do this in a unique way – better than anyone else. It’s a key focus for us.

As a review, the feature allows users to connect their iDevice to an in-car display using either a wired or wireless connection; from here, the compatible display allows users to interact with Apple's iOS either directly, or indirectly using Siri Eyes Free. As usual, we'll keep you updated. 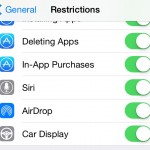 It Looks Like Apple Is Set To Launch iOS In The Car Alongside iOS 7.1 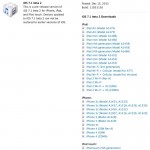 Apple Publishes iOS 7.1 Beta 2 For Registered iOS Developers
Nothing found :(
Try something else