You are using an outdated browser. Please upgrade your browser to improve your experience.
by Brent Dirks
December 3, 2013
Honda has just introduced the Display Audio touchscreen system that can be powered by an iPhone. The technology will make its debut with the 2014 Civic, on sale Wednesday, and the 2015 Fit, arriving next spring. Users will be familiar with the icons on the system that resemble smartphone apps. Internet-powered music sources, like Pandora, are also built into the interface. Users can create personalized stations, like songs, and view album artwork directly from the touchscreen. The new device will connect with the HondaLink apps, which receive information from an iPhone 5, 5s, or 5c. Here’s the content available to drivers on the 7-inch capacitive touchscreen:

Connect App – Provides convenient access for many services including location searches, local weather, messaging, Maintenance Minder alerts, service scheduling by phone, and access to the Owners Guide. Users can tap for weather updates and store favorite destinations for quick routing with the Navigation app. Navigation App – For the first time Honda is offering a comprehensive cloud-based navigation app for purchase2 that includes 3D mapping and continuously updated traffic information. As the first navigation app developed by an automaker with mapping data provided by HERE, a Nokia business, this app offers a variety of location search options including search by point of interest, text search, or previous locations. Routes can be pre-planned on a smartphone and will display on the vehicle's touchscreen. Turn-by-turn routing guidance is available through the vehicle's audio system as well. Aha™App – provides access to an extensive and diverse selection of audio content across multiple genres and demographics, plus featured new stations, Internet radio, podcasts, audiobooks, news, Twitter and Facebook updates and nearby location listings for restaurants, coffee houses, hotels, weather, parks, and gas stations. Users can tap to personalize stations or add favorites via smartphone or directly through the Display Audio interface. Launcher App –Finds and organizes Honda-approved 3rd party apps so they can be quickly integrated into the Display Audio system. Approved apps can be found through the Launcher and shown on the Display Audio screen for easy access.

Display Audio will also integrate into Siri Eyes Free mode. With the simple touch of a steering wheel button, users can direct Siri to complete a number of tasks, including sending texts and emails, reading incoming texts and emails, checking the weather, and turn-by-turn voice navigation. The 2014 Civic and 2015 Fit will be the first Honda cars that offer the mode as a built-in feature. Last week, Honda announced that the 2013-2014 Honda Accord and 2013 Acura RDX and ILX models will offer the functionality as a dealer-installed accessory. Other car makers are quickly adding the feature to their models. In October, General Motors announced that several of its 2014 models will offer Siri Eyes Free mode. 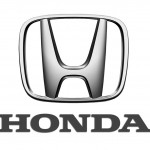 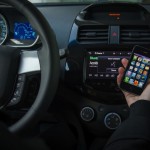