You are using an outdated browser. Please upgrade your browser to improve your experience.
by Joe White
December 2, 2013
Company: Dekke Product: Slope Price: $59.99 (9.7-inch iPad) and $54.99 (iPad mini) Compatibility: iPad Website: www.dekke.net Date: Dec. 2, 2013 Apple’s iPad Air and second-generation iPad mini are available to purchase, but for those looking to house their new tablet in an upright stand, a surprisingly limited (and disappointing) selection of products are available on the market. Most of these either look dreadful, threaten to harm the iPad, or both. Fortunately, the power of Kickstarter has brought a new iPad stand to the market. Called Slope, the product uses "microsuction" suction technology to hold an iPad Air or iPad mini firmly in place. It looks good, too; as you can see, when housed in Slope, one’s tablet looks kind of like an iMac. On paper, Slope looks and sounds great. But how does it hold up after several weeks of real world use? In our latest product review, we find out.

Slope is a single piece of curved aluminium with two flat parts, each of which includes a microsuction pad. One part of Slope attaches to a surface (like a tabletop, for example), and is secured in place; the other can be used to attach an iPad or iPad mini. There is a small "dekke" logo on the back of Slope and a marker to indicate which side up the stand goes. Besides this, the product offers a minimalistic design that fits the appearance of Apple's iPad perfectly. Much like Piel Frama's FramaSlim, the microsuction technology used by Slope is its forte. In essence, this is the best iPad stand I've ever used, and the reason for this is because when holding the iPad, nothing save for the microsuction pad is in contact with the tablet itself. This results in a number of benefits. For one, there's no danger of Slope scratching or damaging the iPad in any way. The microsuction pads will secure the tablet firmly, meaning it won't drop; at the same time, no hard, potentially scratch-inducing material is contact with the bare sides or back of the iPad, meaning the stand poses no threat whatsoever to the tablet. For another, the down facing microsuction pad means Slope will be well-secured to any given surface, and won't fall if the table it's resting on, for example, is knocked accidentally. But also, the use of microsuction pads makes a Slope-mounted iPad look all the more streamlined and iMac-like; the resultant effect is really quiet impressive, and as such Slope is not only the most functional iPad stand I've used, but it's also the most attractive. Removing an iPad from Slope takes a firm grip, but this attests only to the security of the stand itself; the microsuction pads leave no residue on the tablet, and reattaching an iPad is as easy as placing it against Slope. Of course, you can mount the iPad in any orientation. Included with Slope are protective films for the microsuction pads, which Dekke advises users to equip when traveling with the stand. There's also a microfiber cloth for cleaning the pads (pictured above), which naturally can attract dust. Cleaning the pads improves their suction capacity, and Dekke promises many years of use (so long-lasting is the technology, that nobody is quiet sure how long microsuction pads will last - since one has yet to "lose" its capacity, per se, in published tests). All being said, Slope is an exceptional iPad stand, and the best I've used. Plus, if you purchase the stand today, as part of Dekke's Black Friday-Cyber Monday deals there's a discount of 20 percent on offer.

If you're on the hunt for a functional, great-looking iPad stand and have the case, then Slope is the iPad stand we'd recommend. There is no question that this is an exceptional product, and customers won't be disappointed. 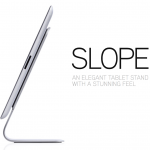 Dekke's Impressive Slope Stand For iPad Gets Discounted For The Weekend 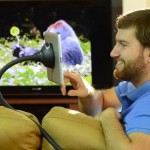 The Monkey Kit Brings A Flexible Twist To The Usually Boring iPad Stand
Nothing found :(
Try something else