You are using an outdated browser. Please upgrade your browser to improve your experience.
by Bryan M. Wolfe
December 2, 2013
Buoyed by strong Black Friday sales, Apple is being shown a lot of love by some of the experts on Wall Street. Two analysts have raised price targets on Apple stock, according to Fortune. Deutsche Bank’s Chris Whitmore notes “We have become significantly more confident in our near-term estimates for Apple.” As a result, he has raised his price target to $625 from $575. Meanwhile, Global Equities Research's Trip Chowdhry has raised his price target to a Wall Street high of $800. His report to investors offered some interesting tidbits: Finally, Piper Jaffray’s Gene Munster has concluded that interest in the iPad mini with Retina display was “better than expected.” He says that his December quarter sales estimate of 24.5 million iPads may have been too “conservative.” Last week, Apple stock closed at $556, which was a $10 increase for the day. For the quarter, the stock is now up 17 percent. For the year, AAPL is up 5 percent. 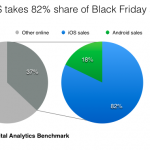 This Black Friday, More Than 80 Percent Of Mobile Purchases Were Made Using iOS